when your cow gets stuck in the Turkey coop

Our week started with a new adventure. Not completely new but new to this batch of babies and mommas. Milking. Sunday night I went into the barn to separate the does from t he babies. I put all the little guys into one pen and all the does stayed in their stalls. They were separated for the first time. Everyone did really well. 12 hours later, Monday morning, we went to the barn with out milk bucket. We let the babies out of their pen, to eat some hay. then one doe after the next jumped onto the milk stand and was milked. Three of the four were never milked before and all three of them stood very nicely and it was easy to get done. We got  a little over three litres every morning of the week. Then I found some lice on the little guys and we had to do something about that first before we could continue milking. Everyone got a needle today with Ivomectin, which I will have to repeat in 14 days. After the treatment we can not drink the milk for 14 days. So unfortunately there will be no milking for the next 4 weeks :( I was just getting used to my beloved goat cheese again ...
Pne thing I will look into during the next 4 weeks is a milk machine. My hands do not like the milking, they get really sore and tingle all day. I do not think that this is going to get better at some point. I will look for something that I can use on the goats as well as on the cow next year...

I love this time of the year when u can just go into the field behind the house and come home with the most beautiful wild flower bouquet. Aren't those pretty ??

We picked the first currents from the berry patch. It was not it wasn't much, just enough for a nice breakfast. Berries with jogurt and some oats. I love currents. the kids don't really care for them, I think they are a little too sour for them. SOOO I got them all :)

We build a new fence across the driveway so we can let some horeses, the cows and goats graze around the building in the farmyard without having them coming down the driveway and onto the road. The red shed is ... or used to be the Turkey house. The right side of it still has the geese in it. As u can see in the picture, when u look closely...CowCow decided to check out where the Turkeys live. The floor in the shed is very rotten and the cow went through the floor wherever she placed her foot.  And she froze...we tried everything, oats, treats, the calf that was calling her on the outside...nothing would move her. G. had to get the chainsaw and cut half the wall out of the shed. 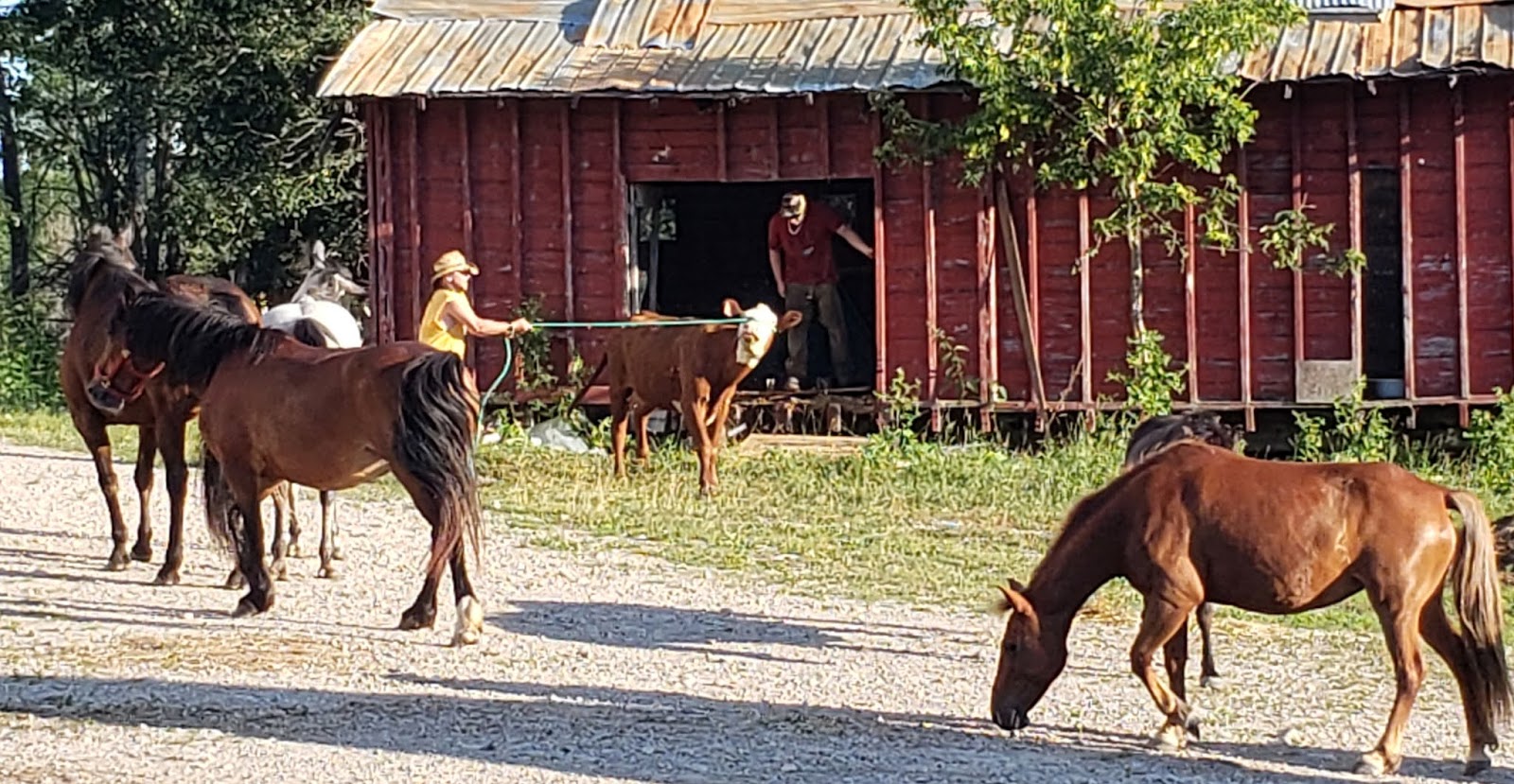 It was kinda funny to watch. All the horses and chickens and turkeys came to watch what was happening. Finally after a long long time of trying the boys finally got her out.

Cowcow was happy to be out of the trap and wandered off to new adventures. We moved the Turkeys into a new barn. They were a little upset at first but after a few nights now they seem to like their new stall. They are free ranging around the farm all day and come running at night when I come with the food bucket. I really have to say that they impress me every day. They are so smart and curious ... such a fun bird. I will have to take some pictures of them and post them

Daisy slowely but surely turns into a real farm dog. unfortunately includes that a daily bath in the cow poop puddle. She knows that she has to have a bath with the waterhose before she comes into the house at night ... and she is kinda looking forward to it in this heat. She loves all the animals, never bothers with the chickens or anything else that she could chase. She loves her ponies. She has been playing with thise guys since she was a puppy. It is very sweet to watch.

The heat continues and we take every minute that we can spare and spend it in the water.
Yesterday I too the kids to the lake that is just across the highway from us. Eagle lake . I love it there and I always think we don't spent enough time in on and around the water. I think I see a little boat somewhere in our future. Waleye for supper is always a treat !!!

I can not believe the summer we are having. I can't remember a summer that has been so hot and constantly sunny for such a long stretch ... we desperately need rain. We get the odd shower and Thunderstorm but not enough. The grass is not growing, the hay harvest is very skim.
I wonder what August will bring. The next two weeks don't look like anything major will change.

We finished our Sunday with a goose rescue. The geese had their first day outside today. It took them a long time to be brave enough to come out of their coop. We left them out of sight for a while and came back later to check on them. Of course they had found the first water hole that came across them. OUR MANURE PIT !!! Well they were happy and we have birds in there all the time, ducks and canada geese...so I guess it is a natural for them. At night thpo, when they wanted to come back into the coop, they couldn't find their way out of the pit. One was tangled up in the weeds and the other three couldn't get up the steep hill. So ... carefully Skyler climbed down , G holding on to him so he wouldn't sink into the manure...ewwww...
WE had to catch one by one and bring them back into their coop.
I wonder if they will be smarter tomorrow. I will try to walk them down to our actual pond. And will let u know if I was successful ...

until then, take it easy and stay cool !!!